Cassidyslangscam is about challenging Daniel Cassidy and his supporters, a group of Irish-American cronies who vandalise our linguistic heritage and treat it with contempt. However, this is a worse bit of cultural vandalism than Cassidy’s. At least the dictionaries are still safe from Cassidy’s nonsense. But this ‘sure it’s only a hole in the ground’ mentality is disgusting. Thanks to Ed for pointing it out and shame on the people responsible for this. 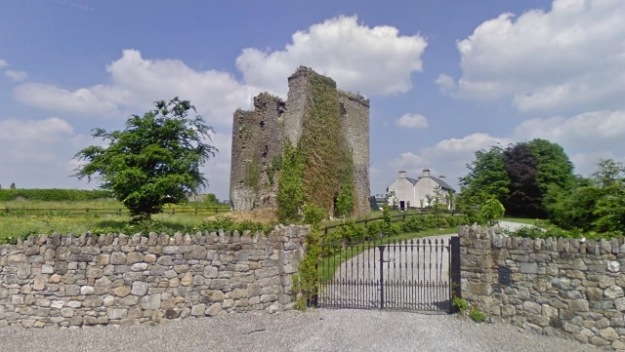 Please forgive me for this post as I may rant quite a bit. Words cannot describe how angry this has made me. On 24th Febuary 2014 after suffering damage during a storm 10 days earlier, Coolbanagher Castle  an early Medieval Tower Hall, built in the early 13th century was completely demolished. Many of you will already know how passionate I am about the preservation of these sites, in fact one of the main factors which influenced my photography was to preserve in images as many sites as possible. Unfortunately I never got to shoot the castle whilst it was still standing, so I guess this is the first casualty in my quest. The reason I have not written about this sad turn of events sooner was because I wanted to see the site for myself, and what a sad sight it is. The entire…

I’ve had a request from someone asking (politely and civilly) for confirmation that the word slacker is like the rest of the words in this blog and that it doesn’t come from Irish.

I’m more than happy to oblige. Cassidy claimed that slacker comes from the Irish sleabhcadh, which means to go limp or to wilt, or the Scottish Gaelic slabhcar, meaning a slouching person. It is really quite difficult to understand why Cassidy even included the words slack and slacker in the book (except of course that the notion of quality control was completely alien to Cassidy and he preferred to pad out the book with any old rubbish rather than end up with the uninteresting pamphlet which he would have had if he had applied any kind of standards to the material he included.) The words sleabhcadh and slabhcar don’t sound much like slack. They are pronounced to rhyme with cow (or sometimes as low, depending on dialect), as shlowkoo or slowkar. The Irish word slacadh does sound exactly like slack, but alert readers of this blog will remember that this means to hit and was Cassidy’s candidate for English slugger. Go figure …

There is absolutely no doubt about the Germanic origins of the word slack. Perhaps this would be a good time to explain what Germanic means, as certain people like Brendan Patrick Keane are clearly too lazy to look up the relevant sections on Wikipedia. The decision of linguists to class English as Germanic is not random or mysterious. If you look at the basic words found in European languages, you will find that some languages tend to be closer than others.

The vast majority of the basic vocabulary of English is clearly related closely to other Germanic languages like German, Dutch, Danish and Swedish, though there are also many loanwords in English from Latin, Greek and French. Remember that to Gaelic and Irish speakers, English people are Sasanaigh (Saxons) and this shows that they were perceived as the descendants of settlers who came to Britain after the decline of Roman power from what is now Germany or Denmark. Irish shows some similarities of basic vocabulary with French, but not enough for them to be regarded as part of the same family. A comparison with French and Spanish would certainly show that these languages are closely related, and a comparison with Irish and Welsh would also confirm that these Celtic languages are close (though not as close or as similar as the Germanic languages).

A comparison of all these languages together will also show that all of them are distantly related. They all belong to the Indo-European group. This can be seen in things like the numbers, which are similar in all branches of this group. Anyone looking at this data objectively would reach the same conclusions. It’s just common sense.

The word slack is part of this basic Germanic vocabulary of English. It goes back to Old English (the ancient version of the language used before the Norman Conquest) and is very well attested. The OED says that it is from “Old English slæc ‘inclined to be lazy, unhurried’, of Germanic origin.” Slæc was pronounced the same as modern English slack. In Middle English, it was written slac. For example, here is our old friend, the Michigan University Middle English Dictionary:

Slacker seems to be a development from these meanings of slack in the late 18th century.

Sleabhcadh and slabhcar are almost certainly borrowings from Old Norse (the language of the Vikings). McBain’s Gaelic Dictionary links slabhcar to Norse slókr, which apparently meant ‘a slouching fellow.’

In other words, even leaving aside the probability that sleabhcadh and slabhcar are probably of Germanic (Norse) origin, if slack has always existed in English with the sense of loose or lazy, what’s the point of looking at other languages for the origin of slacker? Only an idiot would bother. Only an idiot ever did – that idiot being Daniel Cassidy, Professor of Pseudo-Irish Hornswoggling and General and Applied Flakiness at the New College of California.